Collect and examine information in order to empathise with users and identify their needs and scenarios of use.

“Every approach to usability seeks to make products easier to use.” – Jesse James Garrett

As this is the first time I ever carried out a survey, I decided to use Google Forms to gather information quickly. Sebastian and I both created questions we wanted to put into our survey and I looked up a few online question-making tips (see reference below). I work in a market research company, so I sent an email around asking for some help to phrase questions correctly. Only one person replied, which was pretty disappointing, but he was very kind and helped me to construct the questions in such a way that we would yield the richest results. Here is a screenshot from our Google Forms results (Fig1) and from the results extracted from the form which I began to analyse in excel (Fig2): 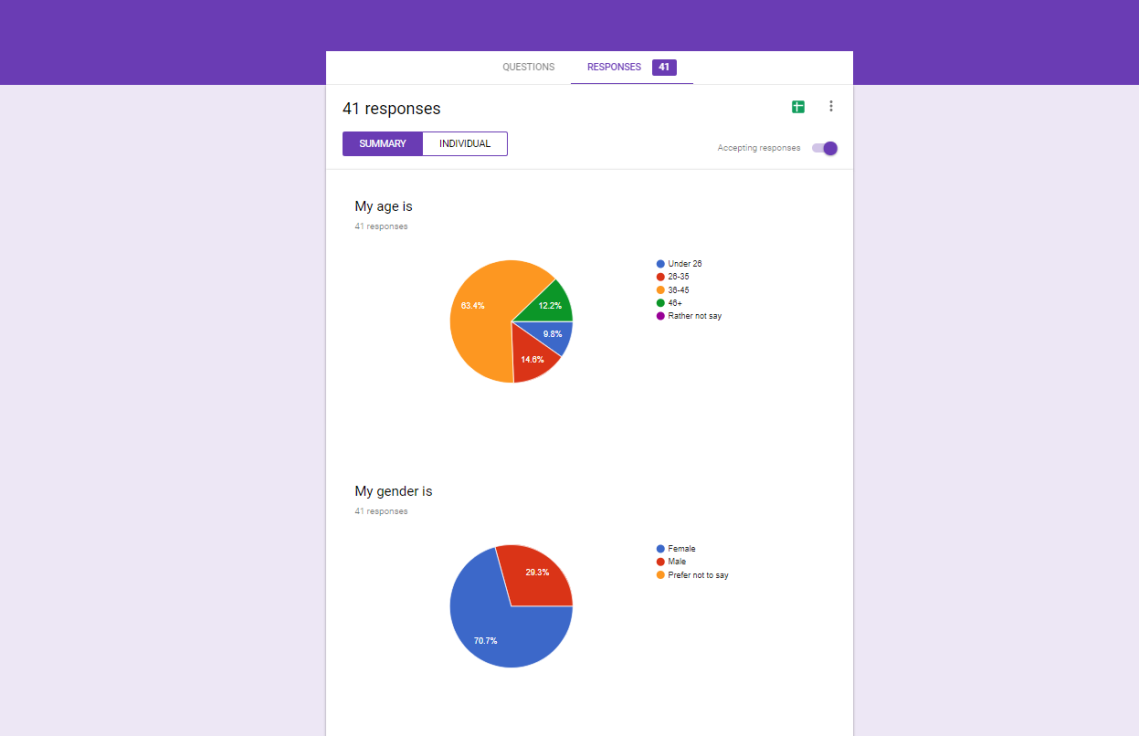 I also checked out a MyfitnessPal Facebook Group to see what current users were saying. Many had discoverability and memorability issues, indicating the clarity of the buttons needed improvement and that consistency and standards weren’t being entirely met.

For a quick usability test of MyFitnessPal, I asked another user to carry out a task I myself have had trouble with along with the above Facebook Group member (Fig 3) and that was, deleting food and deleting meals.

I asked him to add food to the diary, he found that easy. Then when the meal was created, I asked him to simply delete the whole meal. I watched as his frustration increased as he pressed the meal name heading, nothing happened, held down the meal name heading, nothing happened, swiped both the meal heading and the individual contents right and again nothing happened. As an experienced smartphone user he became very irritated that the consistency and standards he was used to didn’t exist and it was clear that this would be an issue we could address in our paper protoype. When I showed him the button to carry out the task he said it was ‘rediculous’ and ‘how is anyone supposed to know that’s how you delete the meal?’ (Fig 6) 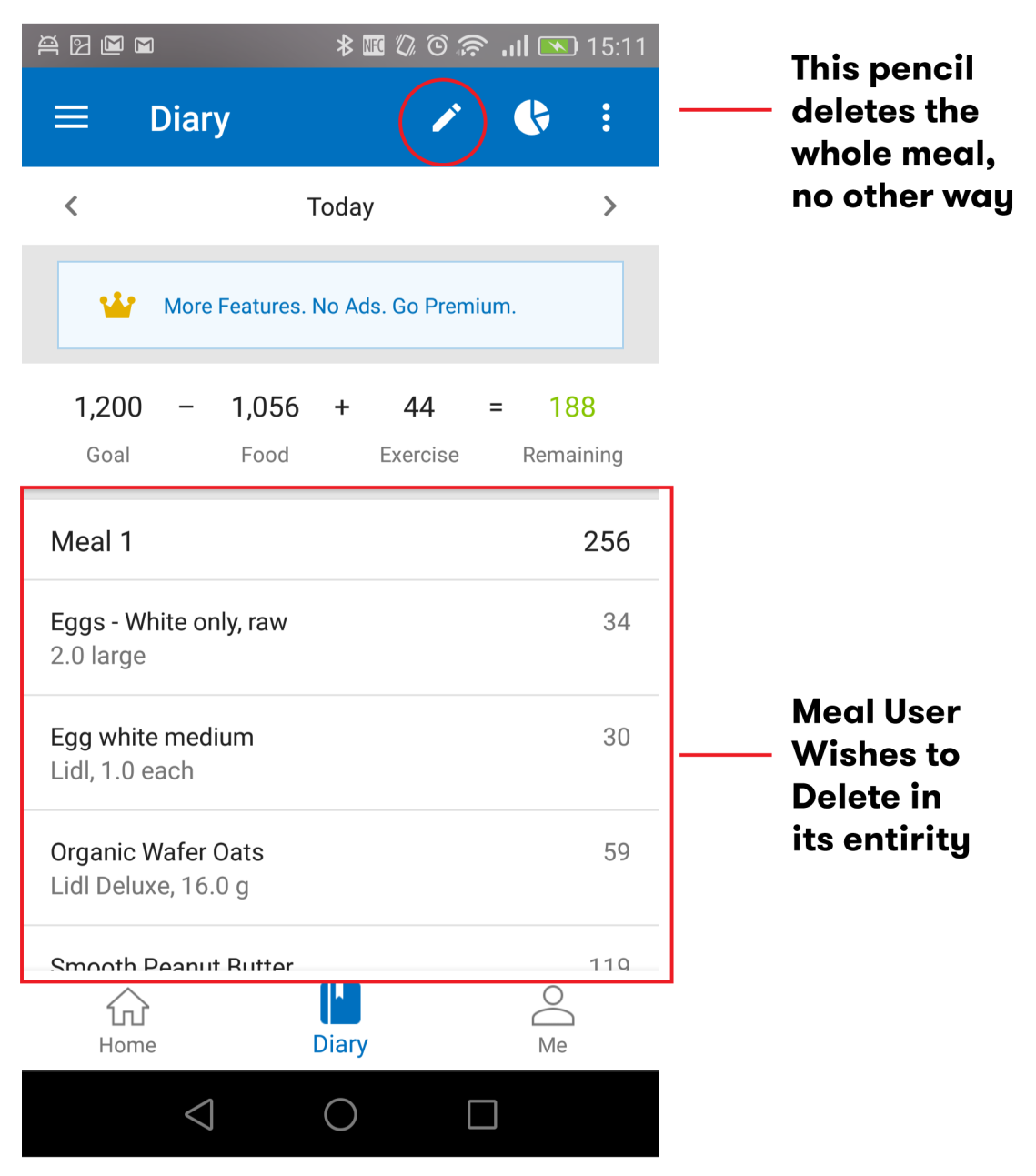 “On the average Web page, users have time to read at most 28% of the words during an average visit; 20% is more likely. – Jakob Nielsen

As I previously examined MyFitnessPal using the 10 Usability Heuristics for User Interface Design by Jakob Nielsen, I decided to do the same for two similar food diaries; Lifesum and FatSecret (awful name) to compare usability and features when carrying out two task models; Adding food to create a meal and updating fitness goals.

Using a likert scale, I evaluated how well two competitors adhere to Nielsen’s 10 heuristics. I have picked out a few issues I found that scored badly in relation to both apps:

Aesthetically, this is great! Lovely icons that match the real world and animations that are engaging  yet don’t overtake from the purpose of the app. Adding food is simple and there is a very big list of foods verified by users, restaurant foods and branded foods much like MyFitnessPal. However once you select the item to add to your meal, there is no visual verification that it has been placed in your meal, which is confusing and frustrating and means that visibility of system status is poor in relation to this very simple task. You must select back twice to return to the diary page then scroll down a good bit to find the addition, which is buried underneath updating your weight and adding water, which could be placed elsewhere as these are secondary needs. Overall it means there are issues with user control and freedom, consistency and standards, visibility and flow, hierarchy and flexibility and efficiency of use. Also there is no section to track exercise. This is not necessarily a bad thing, it just doesn’t include it as a feature.

Below, I have highlighted the problem of visbility of system status in Lifesum when adding food to a meal. Once the egg is added to the meal (fig 12), there is no visual confirmation that it is now saved there, you just get sent back to the list searching for eggs (fig 13).

Aesthetically, this is not as slick as Lifesum, however, technically it ticks a lot more boxes on the heuristics list. There is good hierarchy and nesting of information, recognition, user control and freedom and consistency and standards are met quite well overall. The biggest problem is the user control and freedom in relation to the limited list of foods within the diary. This is quite a big problem as the purpose of the app is to track calories and keep a nutrition diary, however it is impossible to be accurate when certain foods are not on their database, which renders using the app pointless at a very fundamental level. Users have to choose the closest option or guess. This feature can be easily updated though. Users can track exercise but it is at a fairly basic level, only syncing to three predefined devices and giving approximate calories. For a user who has a keen interest in calories in vs calories out, this is not ideal and scores low on user control and freedom.

Below, I have highlighted the problem of user control and freedom and also match between system and real world. When adding food to a meal, not all the items the user wants to eat appear in the database there are plenty of similar items but not the exact one and this effects the goal of the user – calorie counting. Users can add missing items themselves (fig 17) however, if they are entering food in retrospect or in advance they may not know all the nutritional facts, thus get their calories wrong. 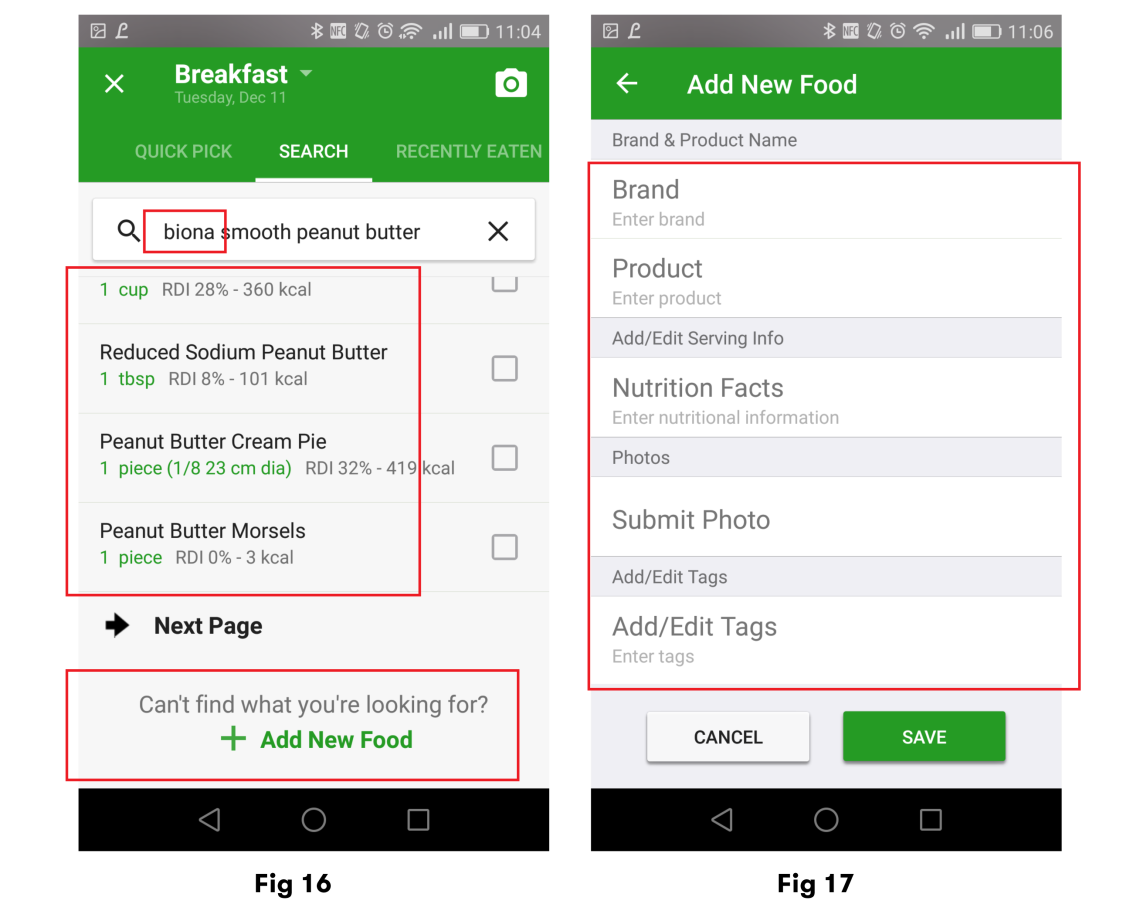 As a team we decided to focus on two task models.

Task 1: Entering a meal into the food diary

First I sketched out the “As-Is” of both tasks on paper (fig 18). Then I created a workflow using screenshots of the task within MyFitnessPal (fig 19, fig 20) The following images are taken from my class PowerPoint presentation on December 7th. 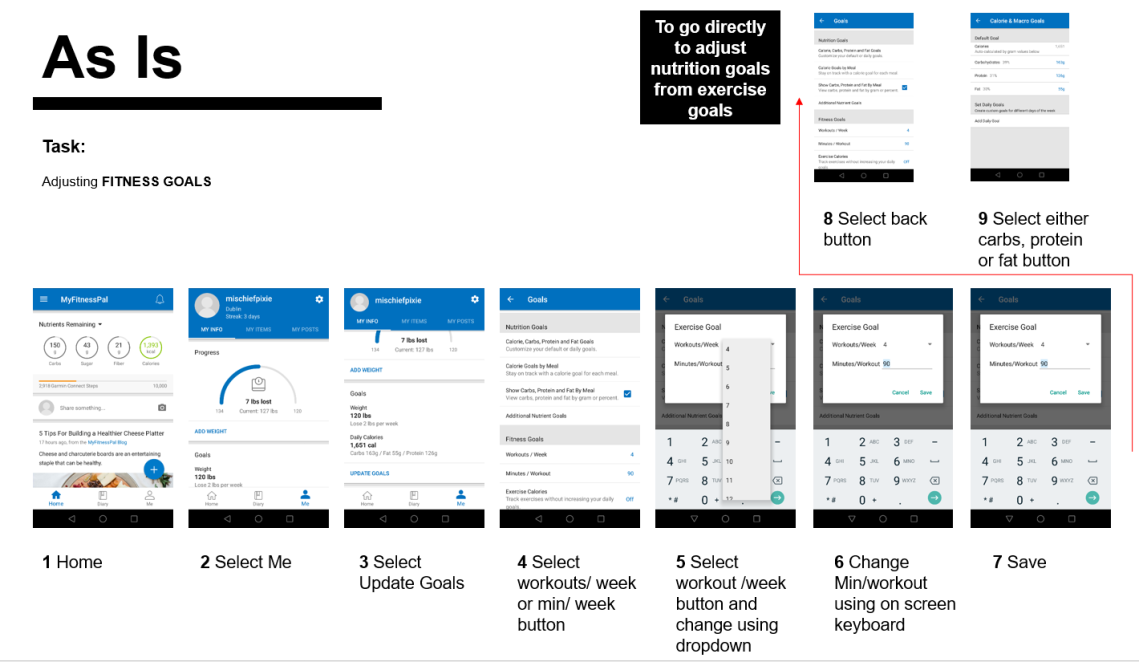 I then highlighted points where adjustments could be made (fig 21). I noticed that flexibility and efficiency of use could be improved by including several accelerators and actions on one page, making buttons clickable and using an onscreen keyboard rather than a scroll. Below is are a number of sketches I made, including features that improve flexibility, efficiency, aesthetic and minimalist design, user control and freedom and visibility of system status. (Fig 22,23,24) This was the first time I had ever broken down an app to examine every step taken in carrying out a task. I was surprised by how complex an app really is, you never notice when an app is good, as it feels intuitive. For example, when drawing the to be, I couldn’t call to mind how the keypad appears to allow you to edit numbers, I had to go and actually open it up (fig 23). “If, responding to the directive design for the user, you follow logic, you tend to canvass the user community, collect their requests for functions, and then provide them a product containing all of those functions….The problem is that while logic is a powerful and effective programming tool, it is a pathetically weak and inappropriate interaction design tool….But personas are unique and uniquely effective….Personas, like all powerful tools, can be grasped in an instant but can take months or years to master”.—  Alan Cooper

When we received our survey results, we saw that the majority of users were in the 36-45 age category, so I decided to use this as a starting point for my personas and subsequently, scenarios. In excel, I broke the respondents into male and female (fig 2) then examined their responses. Here are my personas, Paul and Elaine: 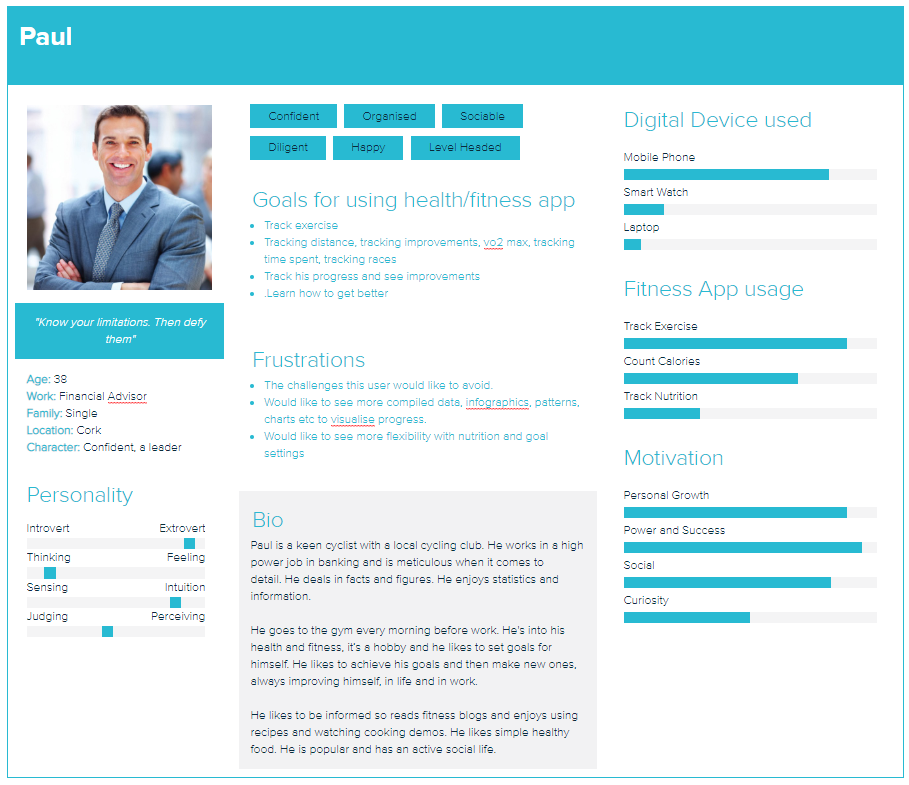 It was great to see the collective users come to life, in a persona. I could really visualise them as people, their motivations, goals and frustrations in life and could imagine them using the app and what pain points they may come up against, depending on their personal situation.

“Personas without scenarios are like characters with no plot. ” — Kim Goodwin

From there, I used ‘Scenes’ to create a couple of scenarios for Paul and Elaine. Below is a sample of one of the slides for each: